Rizwana, a young girl was one of the students enrolled in class I of the Senior Secondary School in Jodiya Meo, Rajasthan. She was soon noticed by the teachers for her meticulous school and homework and her punctuality. She actively participated in the class room activities and had an immense drive to learn. However, a month after her enrolment she stopped coming to school. While the teachers did notice her absence in school, they assumed she had some work and would come back to school soon.

Rizwana did not turn up to school for a month and that worried the Resource Teachers employed by SST in the school. Raju, a Resource Teacher, went looking for her house and after several attempts, located it. He met with her mother there who reassured him that Rizwana would be in school the next day. When Rizwana did not attend school the next day, Raju visited her house again. This time the mother shared with the teacher that while she had been persuading Rizwana to go back to school, she had refused. They called Rizwana to understand what was stopping her from attending school. Rizwana shared that the teacher at the school reprimanded her for not coming to school in uniform. Her father, a truck driver was out and till he came back the mother could not buy her a new uniform due to lack of money. 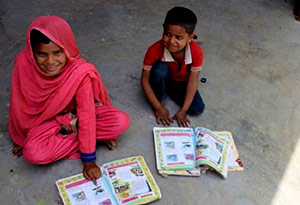 Raju deliberated and came up with a solution. He helped the mother join a Self Help Group for a loan for Rizwana's uniform. On his personal guarantee, the group which was initially hesitant about lending money to a new entrant, extended a loan of INR 500 to Rizwana's mother.

Rizwana has a uniform now and she no longer has to miss school. She continues to show tremendous progress in her learning and has caught up with her missed school time. A small initiative by a concerned teacher has helped bring Rizwana, a bright young girl, back to school.